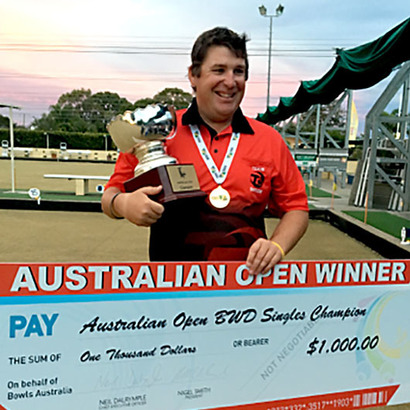 Josh Barry comments on Taylor Bowls products: “Simply the Best!”
Which model/size of Taylor bowls do you enjoy playing with and player:
"Taylor SR size 4. They have an nice draw and are consistent - much improvement on the old Dunlops I started with."
What country/region/club/team do you play for?
"Australian Representative, Sebastopol Bowling Club – Premier Division 1."
When and why did you start playing bowls?
"I started playing in 2004. My Grandmother gave me her old Dunlop bowls. I lived across the road from the bowling green in my home town of Warracknabeal and hung over the fence watching the bowling so got involved in trying it out."
Are there any particular stories/incidents you would like to tell us about that relate to your bowling?
"Finishing finals at World Championships, Connecticut, USA on an ice hockey rink due to a cyclone hitting! Running for storm shelters in Pretoria, South Africa, due to lightening storm ending with hail the size of golf balls."
In the bowling world who do you most admire and why?
"Ryan Bester/Aaron Sheriff/Mark Casey because of dedication to the sport."
Do you have a favourite – film, book, song, football team, actor, etc? It can be more than one if you like.
Song - Hall of Fame/We are the Champions
Movie - Fast and Furious
Football Team – Grelong Cats/Melbourne Storm
Josh’s Major Bowling Achievements: