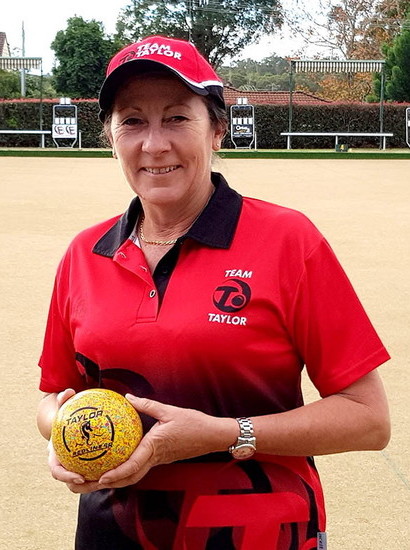 "Having a bowl I can trust is worth everything… my Taylor Bowls give me that! Taylor Bowls is a company that has proven result over many, many years & that’s good enough for me… they know ‘their stuff’!!!"

Which model(s)/size of Taylor bowls do you enjoy playing with and why?
"I am currently using SRV size 3. I love the even line they take & I can trust them in any conditions."

What country/region/club/team do you play for?

When and why did you start playing bowls?
I started in 1994 when a friend convinced me to give it a go. I was playing golf at the time & thought I was too young for bowls… within a few weeks I was hooked!

Which model(s)/size of Taylor bowls do you enjoy playing with and why?
I am currently using SRV size 3. I love the even line they take & I can trust them in any conditions.

Are there any particular stories/incidents you would like to tell us about that relate to your bowling?

I have so many great memories because of my time in bowls! The many wonderful people I have met from all around the world is something I treasure. A highlight for me is of course competing at the Comm Games in Delhi as were the other international opportunities I had. I now thoroughly enjoy coaching our up & coming junior bowlers!
Being part of the commentary team in Glasgow 2014 was also a real ‘hoot’! I did however, bring a bit of Aussie bowls slang into the commentary… quite by accident! This included saying “drew the absoluter”! (I’m sure “absoluter” is a word) There were plenty of laughs & banter going on… very enjoyable!

In the bowling world who do you most admire and why?
There are many great players I admire, but probably just hitting the front would be Steve Glasson. Steve through his achievements has never lost sight of where he started & the people who helped him along the way. He respects the game & has remained humble throughout.

Do you have a favourite? – film, book, song, football team, actor, etc. It can be more than one if you like.

Always been quite partial to actor George Clooney (for obvious reasons haha). One of my sporting favourites from outside bowls is Roger Federer. I enjoy lots of films… but one of my favourites would have to be ‘Love Actually’.