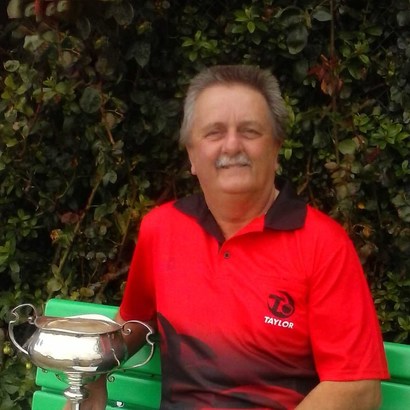 Questions and Answers from Rob:

Which model(s)/size of Taylor bowls do you enjoy playing with and why?

Taylor Redlines, Size 5 - the reason I chose these bowls was for their versatility in shot play. I feel these are the best bowls for the numerous surfaces I play on with regards to speeds of the greens. Taylor bowls are the most reliable bowl for all round play. I continue to enjoy success with my Taylor Redlines.

When and why did you start playing bowls?

After completing a semi pro Football career and still being a competitive sportsman, I took up Crown Green bowls for several years while still in the UK then moved to New Zealand in 1989 and took up Lawn Bowls.

Are there any particular stories/incidents you would like to tell us about that relate to your bowling?

In the bowling world who do you most admire and why?

Do you have a favourite – film, book, song, football team, actor, etc?