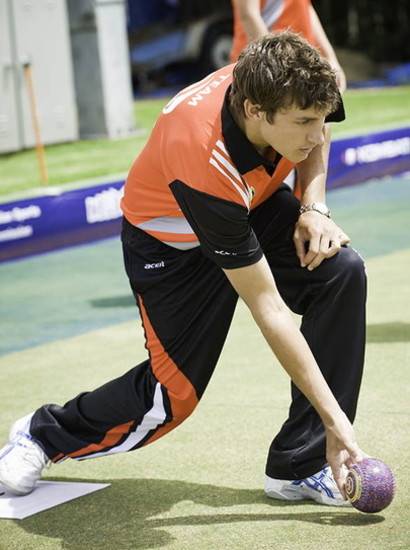 “I use the Taylor SR because the bowl adapts well to all conditions. It handles both quick and slows greens with consistency and predictability, performs well in windy conditions, and gives me the confidence to play a wide range of shots”

Which model(s)/size of Taylor bowls do you enjoy playing with and why?
Taylor SR size 4 Heavy. In my opinion the Taylor SR is the best bowl for all conditions. It reacts well to both quick and slow greens, is affected by wind less that it’s competitors, and holds it’s line on a run shot.

What country/region/club/team do you play for?
Home Club – St Johns Park BC
Zone – Sydney South West Zone 12
State – NSW
BPL – Sydney Lions
When and why did you start playing bowls?
I’ve been a fan of all sports from an early age. I firstly got into bowls through my family; both my Grandad and Dad were keen players. After a few games down at the local club with them, it didn’t take long to fall in love with the sport.

Are there any particular stories/incidents you would like to tell us about that relate to your bowling?
I once threw a bowl into the side ditch in a televised match, and it wasn’t a wrong bias. Quite embarrassing really.
In the bowling world who do you most admire and why?
Steve Glasson - Not only because of his achievements on and off the green, but his demeanour.
Do you have a favourite – film, book, song, football team, actor, etc? It can be more than one if you like.
Film – Seven Pounds
Book – Open: Andre Agassi
Football – Brisbane Broncos
Sportsman – Jason Day/Johnathon Thurston